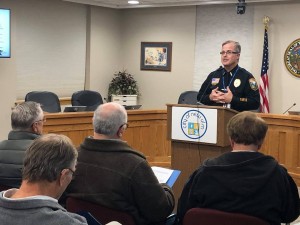 On Oct. 23, members of the Minnesota Senate Capital Investment Committee began their day by learning about Highway 14 expansion.

As Highway 14 Partnership members are aware, Nicollet to New Ulm expansion is currently being considered for a federal BUILD Grant that—combined with state commitments—would fully fund the expansion project. BUILD Grant awards will be announced by U.S. DOT by Nov. 12, but in the event we are unsuccessful in pursuing federal funding, we will need the Minnesota Legislature’s full support to finish the project. With the Legislature expected to consider a significant bonding proposal in 2020, this committee could play a key role in finishing Highway 14.